DIY (Do it yourself) 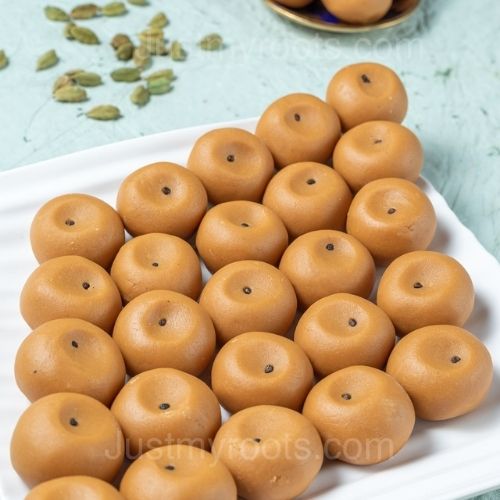 Taste the flavours of soft and sweet Shekhawati peda and experience the rich taste of Rajasthan's famous sweet right in your city. A must try peda that also be consumed during fasts. 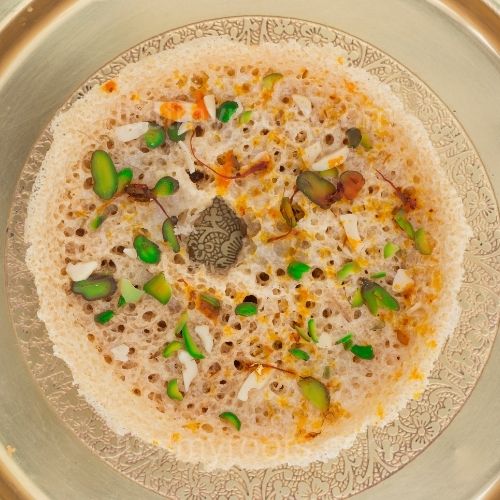 An unique and crisp traditional dessert recipe prepared mainly from maida(refined flour) and sugar syrup. Basically, it is a disc-shaped sweet cake with porous texture and is mainly served by dipping it in sugar syrup. 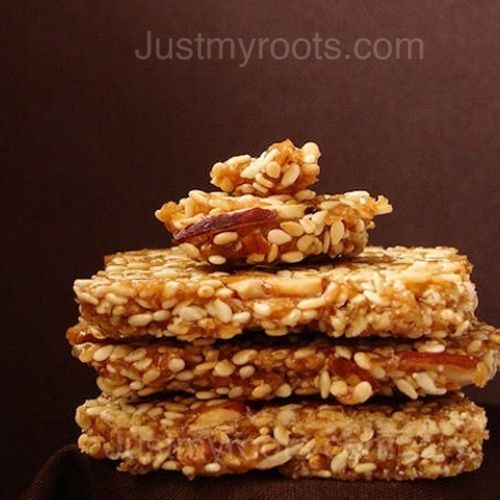 Each Handpicked almond is dipped in syrup made of jaggery and sugar and is rolled in sesame seed making it a must try winter delicacy. Has the goodness of gur(jaggesry), til(sesame seeds) and dryfruit. A perfect healty munchng option. 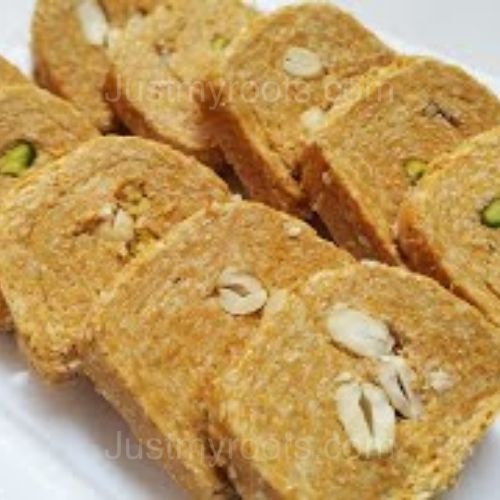 Each handpicked cashewnut is dipped in syrup made of Jaggery and Sugar and is rolled in sesame seed making it a must try winter delicacy. Has the goodness of gug, til(sesame seeds) and dryfruit. A perfect healty munchng option. 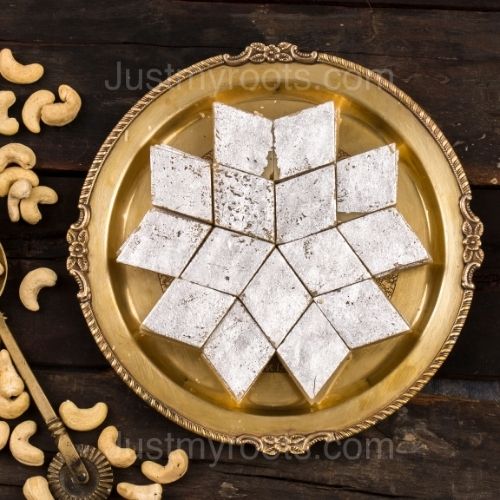 Agrawal Sweets' Kaju Katli is specially made with finest cashewnuts and has just about enough sugar content in it. Their Kaju Katli enjoys a very special place among their customers. It’s a special treat and can be an ideal gift for your friends and family during any occasion or festival. A must try… 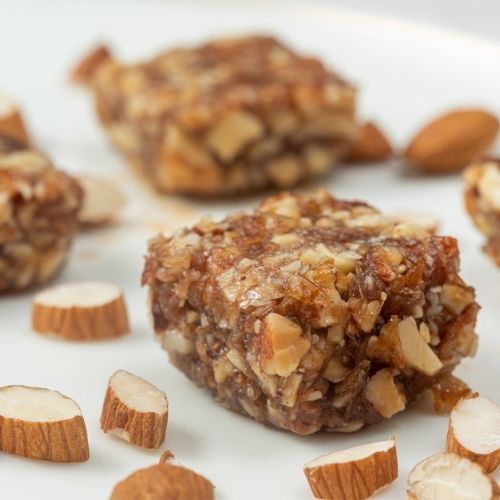 A fusion sweet made of roasted almonds along with gulkand(jam made from rose petals), each bite gives the crunchy taste of almonds and sweetness of gulkand. A delicacy, which should be tried once atleast.. 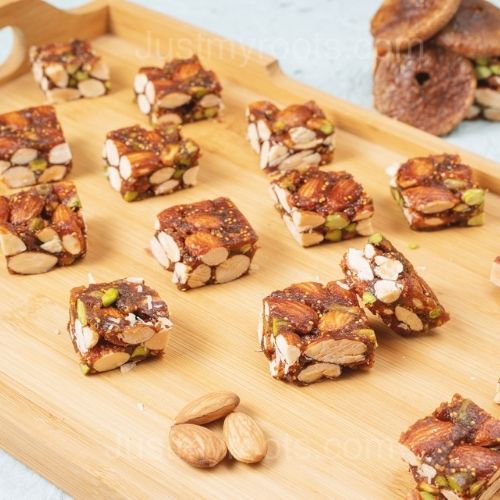 Anjeer Dryfruit, a sweet made primarily of almonds and pistachhio has the binding agent as anjeer(figs) and hence has very little or less sugar in it. It is a good alternative to regular sweet, with natural sweetness of fig. 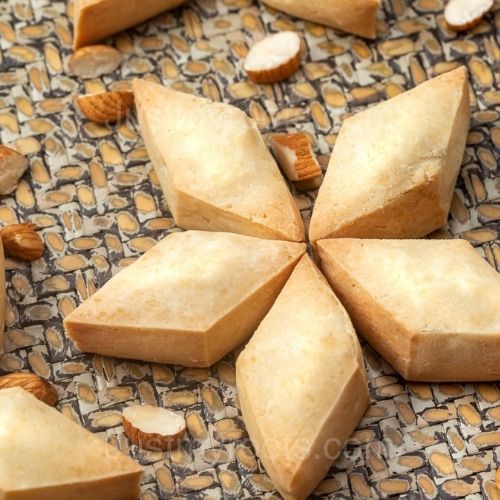 Freshly made Badam Katli roasted through detailed process, Baked Badam Katli tastes just like a cake which is a little hard on outside, but soft inside. 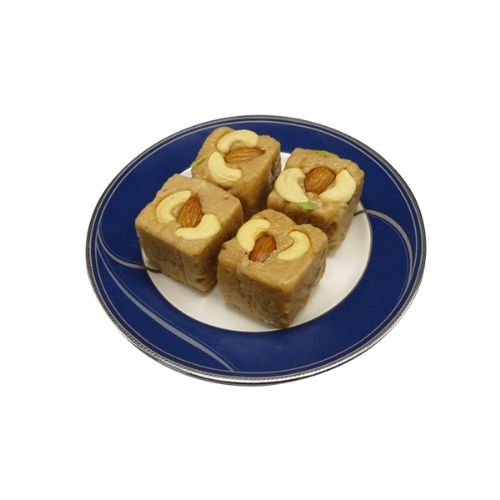 Sohan Halwa is a traditional Indian sweet, which is a variety of dense, sweet halwa and believed to be of Persian origin, linked with Iranian sweet Sohan. 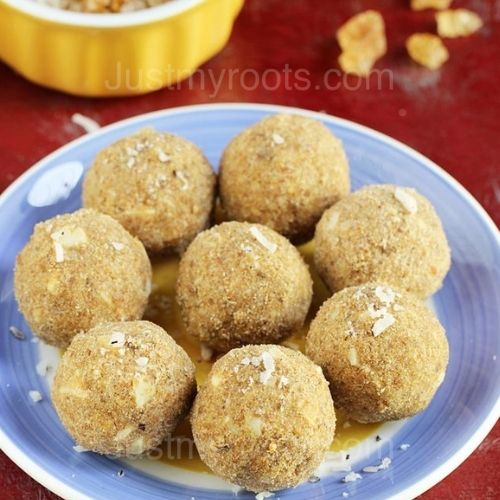 Gond Ladoo is a sweet ball made of wheat flour and gond(edible gum) along with dryfruits is a delicacy, enjoyed by all. A must try, this sweet has a lot of health benefits as well. 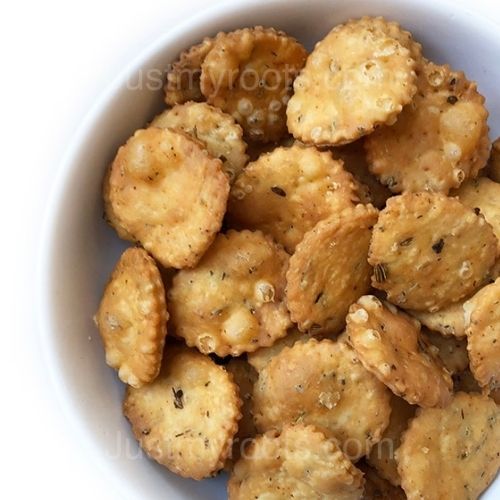 Spicy Indian crackers, Masala Mathris are Indian style crispy and spicy fried crackers which are a very popular snack in the northern part of the India. These mathris make a wonderful teatime snack for anyday. Just pair them with a masala chai or coffe and your brunch is sorted. These flaky and crispy mathris are made from flour, salt, ghee(clarified butter) and a combination of spices. 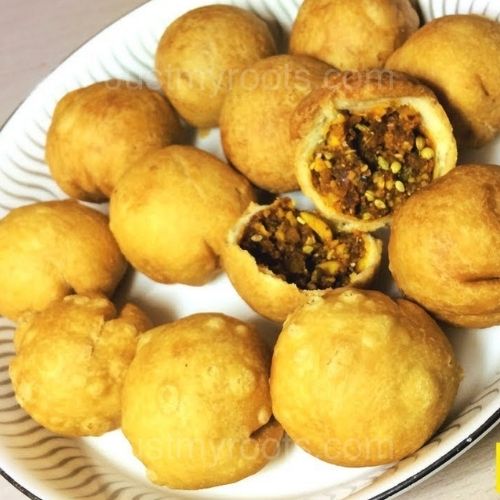 Mini Kachori, a signature dish of Agrawal Sweets, has already developed a huge fan following across the market. Crafted skillfully with choicest of ingredients, Mini Kachori gets it's distinct taste owing to a perfect blend which has been established after intense research and many trials. This delicacy is made of dried masala hence can lasts longer but seldomly does due to its superior taste. We are extremely sure; one serving will not be enough to satiate your taste buds. A Must Try and a Perfect Gifting Option to show your Love…. 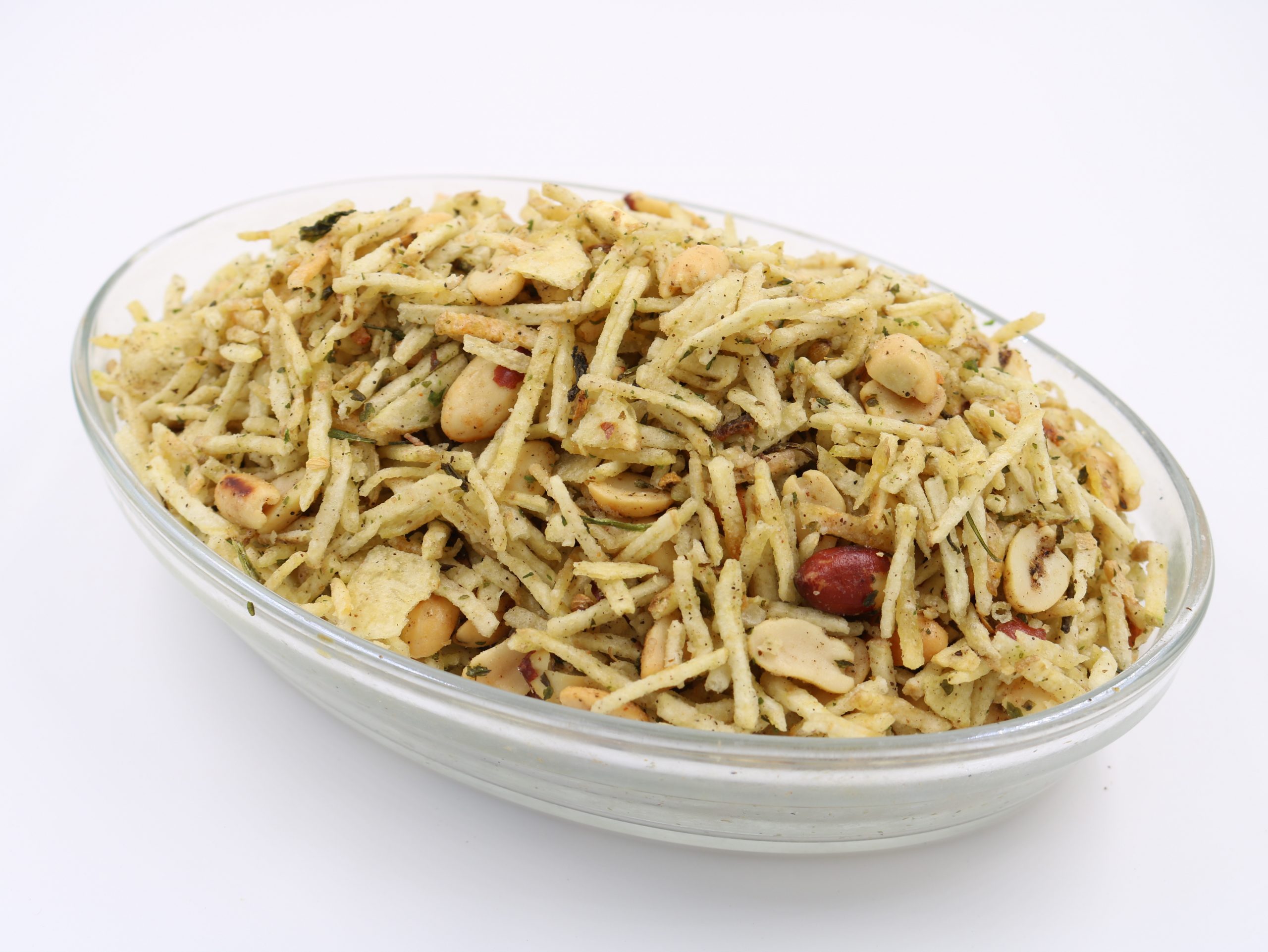 A falahari(food eaten during navratra fasting) delight, Mitha Falahari Mixture is made of potato and groundnuts. Apt for making your fastings more tasty and something to look for 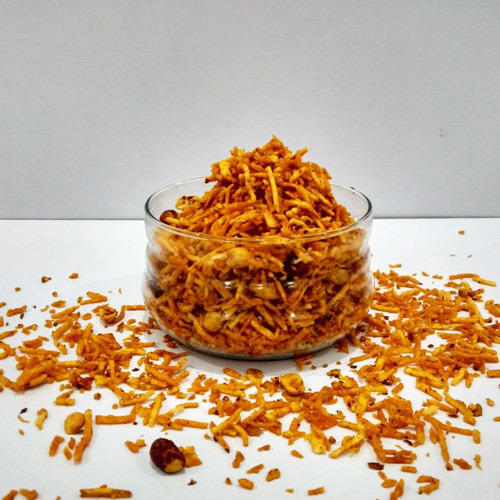 A falahari(food eaten during navratra fasting) delight, Teekha Falahari Mixture is made of potato and groundnuts. Apt for making your fastings more tasty and something to look for 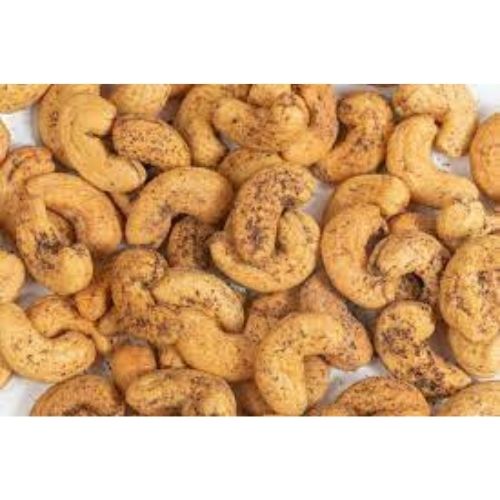 180 graded cashewnuts fried in pure ghee(clarified buttrt and coated with spices and condiments. 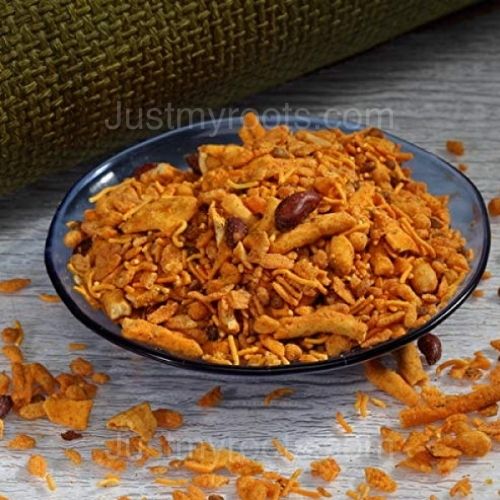 As the name suggests, this is a spicy treat widely appreciated for its crispy and spicy taste. Each ingredient is laced with a different condiment to give a unique taste to Charkha Mixture. A must try for lovers of spicy food. 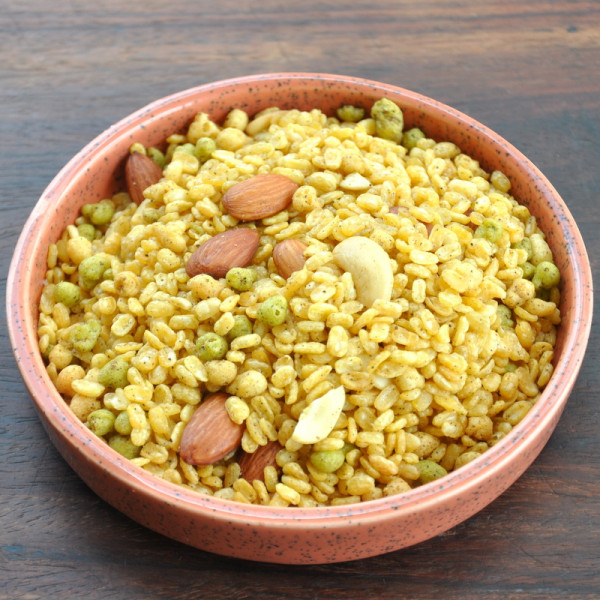 Dryfruit Mogar is a signature dryfruit offering from Agrawal Sweets. Made predominantly of moong dal(green gram lentil), almonds and cashewnuts, Dryfruit Mogar is an ideal gifting option for your near and dear ones. A must try!!! 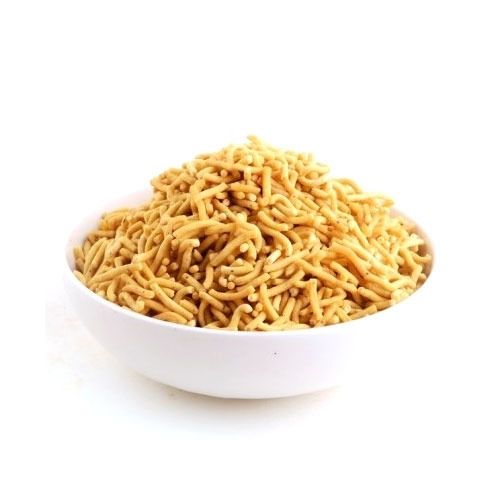 A modified version of Indori Sev. What sets Ujjaini Sev apart is the extensive use of spices and condiments as compared to Indori Sev. 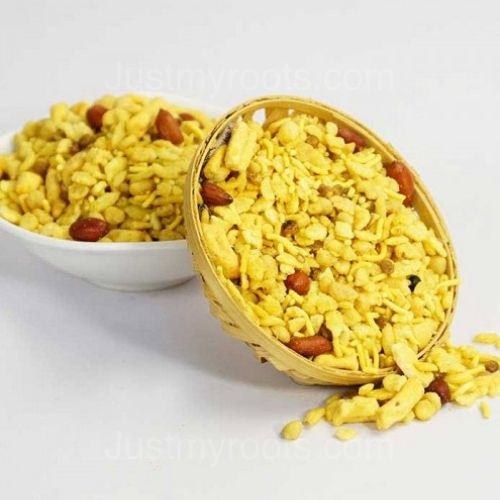 A speciality of Indore, Khatta Meetha Mixture comprises of sour and sweet ingredients blended perfectly to give a unique and everlasting taste. Each bite will give a different taste and the surprise becomes a USP of the Khatta Meetha Mixture. Extremely popular with children, this delicacy delights everyone in a household and ideal for gifting to your near and dear ones… 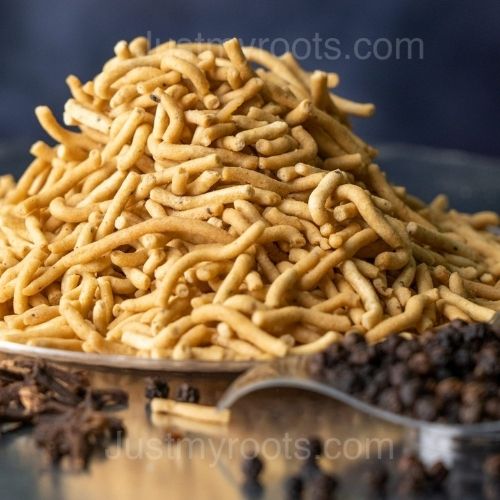 There is a famous saying in Indore. “An Indori needs not three but four things to survive – Roti, Kapda, Makaan and Sev. Ratlami Sev, as the name suggests is the signature dish from MP, a delicacy that has developed huge fan following not only in the country but across the world. Ratlami sev is a popular fried and crisp snack made with gram flour,clove,pepper and other spices. The addition of the special spice blend,makes this spicy and gives a unique taste. Sev can be used with variety of food products both as main ingredient or accompaniments be it Poha, Sev ki sabzi and the list goes on and on…… A Must Try !! 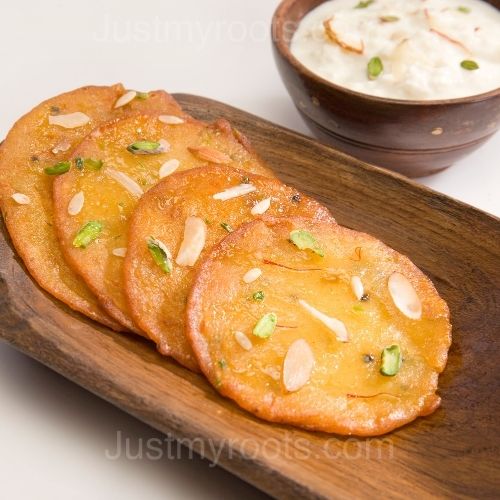 Malpua is a traditional North Indian sweet of soft, fluffy and yet crisp pancakes coated with sugar syrup. It is served with rabri(thickened sweetened milk). It is ideal for festivals and other social get togethers.